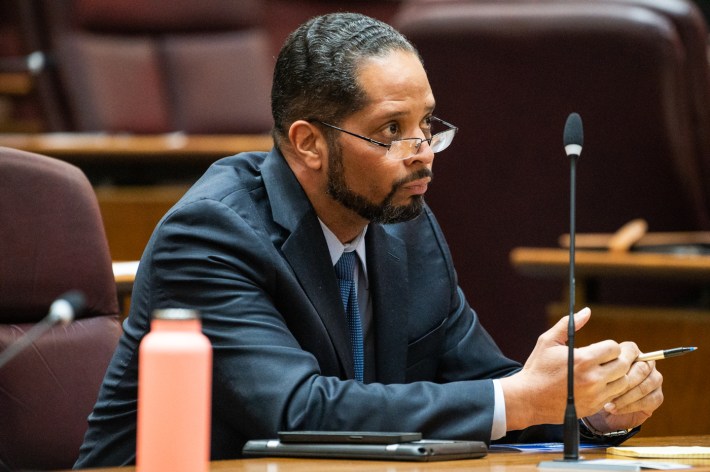 CHICAGO — A controversial proposal to roll back fines for speeding drivers squeaked by a City Council committee vote Tuesday and faces a vote from all 50 alderpeople Wednesday.

Beale’s proposal would change the threshold for $35 tickets to drivers going up to 11 miles per hour over the speed limit. Anyone over that would get a $100 fine.

The full City Council could vote on the matter at Wednesday’s meeting.

Transportation leaders and activists have raised the alarm about a “traffic safety crisis” in Chicago. Drivers have hit and killed at least 17 pedestrians and four bicyclists so far this year, including three children killed in the last month. A hit-and-run driver killed 11-year-old Ja’lon James on the West Side while Beale presented the ordinance last week.

For Beale, he said the issue comes down to fairness.

He criticized Mayor Lori Lightfoot’s change to the speed camera ordinance in 2021, pointing to reports showing traffic cameras disproportionately ticket Black and Latino drivers. Under Lightfoot’s plan, those caught on camera going 6-10 miles per hour over the speed limit get a warning in the mail, followed by a $35 ticket for a second offense. Before that, such tickets were only issued if drivers were going more than 11 miles per hour over the limit.

“This is very important,” Beale said last week. “This ordinance is generating hundreds and hundreds of millions of revenue since it has been changed from 11 miles an hour down to six and it was done administratively.”

According to city data, Chicago’s speed cameras issued 2.3 million tickets in the first 10 months of 2021 after the speeding threshold was lowered to 6 mph — nearly as many as the city issued in 2018, 2019 and 2020 combined.

“This would be a huge giveaway,” Beale said. “To give the people of Chicago some relief when it comes down to the amount of money and tickets that are being generated through this particular amendment.”

Mayor Lori Lightfoot blasted the proposal and called on the City Council to vote it down Wednesday. The mayor also said the ordinance would strip $45 million of speed camera fines that pay for infrastructure upgrades and safe passage workers near parks and schools.

“… [I]t is unconscionable that any City Council member would consider voting to allow for increased speeds near spaces utilized by our children,” Lightfoot said. “I urge all residents to call their alderman and tell them to vote no. We are all responsible for protecting our children, pedestrians, and bikers. It’s a matter of life and death — people need to slow down.”

In 2021, 174 people were killed in traffic crashes in Chicago — an average of one death every two days. That’s a 15 percent increase from 2020, Biagi said — which means roughly 24 more people killed.

“We are heartbroken by all of the fatalities on our roadways,” Biagi said. “We are all hands on deck and to diminish the tools that we have in our toolbox is something that we don’t want to do.”

Biagi said the city referenced this data when choosing the speed at which people receive tickets.

“The goal here was to bring down [the speeding] threshold because we do we need you to drive slower, and one tool in our box is enforcement,” Biagi said. “The faster you go, the less you can see in your peripheral vision. Speeding is the number one driver of crashes.”

According to city data, 40 percent of the people who died from traffic crashes were “outside the vehicle.” Additionally, over half of the crashes — 60 percent — are the result of “reckless driving, speeding, impairment,” according to CDOT.

“The common denominator here is the vehicle,” Biagi said. “We don’t have fatal crashes on our roadways that don’t involve a vehicle. … Cars are designed to keep the people inside them safe — and that’s a good thing, but they’re not designed to keep people outside of them safe.”

Biagi also referenced a 2021 study on the speed cameras CDOT commissioned from University of Illinois Chicago.

The study showed a 12 percent reduction in injury-causing crashes over a three-year period where the cameras are located, Biagi said. “That’s 200-plus people who didn’t get a serious injury in a crash.”

Amy Rynell, executive director of the Active Transportation Alliance, agrees with Biagi, saying “this is not the time to me to let people off the hook.”

Rynell said Active Trans was concerned “about equity and where the cameras would be and how people with lower incomes were going to be potentially inequitably impacted” when Lightfoot first proposed the threshold be lowered.

“But the city has worked on that,” Rynell said, referencing the Clear Path Relief Program which helps people get out of ticket debt.

“The jury’s still out on if that’s alleviating financial hardship,” Rynell said, “but we really believe in lowering speeding and obviously the cameras are just one way to do it.”

“​​This is not the time to be taking safety mechanisms away — this is time to be adding more,” Rynell said. “We are acutely aware that street design is going to make the biggest difference here, and any way we can change the streets to lower speeds is really, really meaningful. But people who get tickets do slow down, at least the people that I’ve talked to.”

The cameras are required by law to only be installed in proximity of a park or school, and the cameras near schools only operate while class is in session.

According to CDOT, the pictures are reviewed before tickets are issued and a child must be visible in the image if taken by a camera near a school. Some committee members expressed disbelief that the images are actually reviewed, and public commenters referenced anecdotal stories of residents ticketed regardless of if a child is in the picture.

“It’s very important that we hear from some experts as it relates to this program,” Beale said. “This program has been tainted from the very beginning.”

‘Nobody is talking about the poor’

Ald. Daniel La Spata (1st), who is not on the finance committee but opposed Beale’s proposal, saying CDOT made a convincing case not to roll back the fines.

“Now, we fully understand this” La Spata said. “Not just how lower speeds impact traffic safety elsewhere, but how they function in Chicago and this ordinance has been successful.”

“Those are facts that we can’t ignore in this conversation,” La Spata said. “But I also don’t think that those are reason enough to overturn a policy like this.”

He noted the recent deaths of 11-year-old Ja’lon, 2-year-old Raphael “Rafi” Cardenas and 3-year-old Elizabeth “Lily” Grace Shambrook. Two of those crashes did not specifically involve speeding cars, according to police and witnesses.

“It is a really strange thing, […] with everything that we are seeing, that today is the day that my colleagues would decide that they want to vote on one of the few legislative tools that we have to reduce speeds and keep people safe,” La Spata said. “I think it’s really absurd.”

“What is the justification that we would give to these mothers over the past week?” La Spata said. “We have a policy that we know, based off of the data, that keeps people from dying in crashes and we would move to overturn that policy.”

“It’s insulting to the memory of those children, I would say.”

Beale said he anticipates the city will justify the cameras as “public safety,” but in his opinion, “the areas where the most tickets are being generated have absolutely nothing to do with public safety and it has everything to do with generating revenue.”

Beale also claimed Biagi “fabricated” the studies and data referenced at the meeting.

“The whole presentation was being disingenuous to try to manipulate their narrative,” Beale said.

Don Bransford and Mark Wallace, who Beale references as “expert witnesses,” spoke in support of the proposal at the meeting.

Bransford said the speed cameras are “targeting the wrong people” and he knew when Lightfoot lowered the threshold it was “going to create problems that don’t exist.” Bransford also questioned whether three people usually look at each of the images before a ticket is issued, as Biagi said in her presentation.

Wallace said CDOT’s presentation was “flowery” and he referenced a Propublica study that showed speed cameras in Chicago disproportionately issue tickets on the South and West Sides.

“Nobody is talking about the poor,” Wallace said. “If the cameras were about changing behavior, revenue would not be going up — revenue would be decreasing.”

“People pay no attention to anything when they’re driving — not the kids, not the stop sign, not the crossing guard,” said Frida Dunn, who said she’s worked as a crossing guard for 16 years at various schools. It’s really getting very scary and dangerous out there.”

As a crossing guard, Gerardo Madrano said he “stands in the middle of the road” and drivers “speed up and go around” him.

“I’m scared for the life of the kids,” he said. “I don’t want to have to write a report that says a kid got hit by one of these drivers.”

Click here to support Block Club with a tax-deductible donation.

Thanks for subscribing to Block Club Chicago, an independent, 501(c)(3), journalist-run newsroom. Every dime we make funds reporting from Chicago’s neighborhoods. Click here to support Block Club with a tax-deductible donation.

‘Great Day to Not Be in Jackson’ Amid Water Crisis